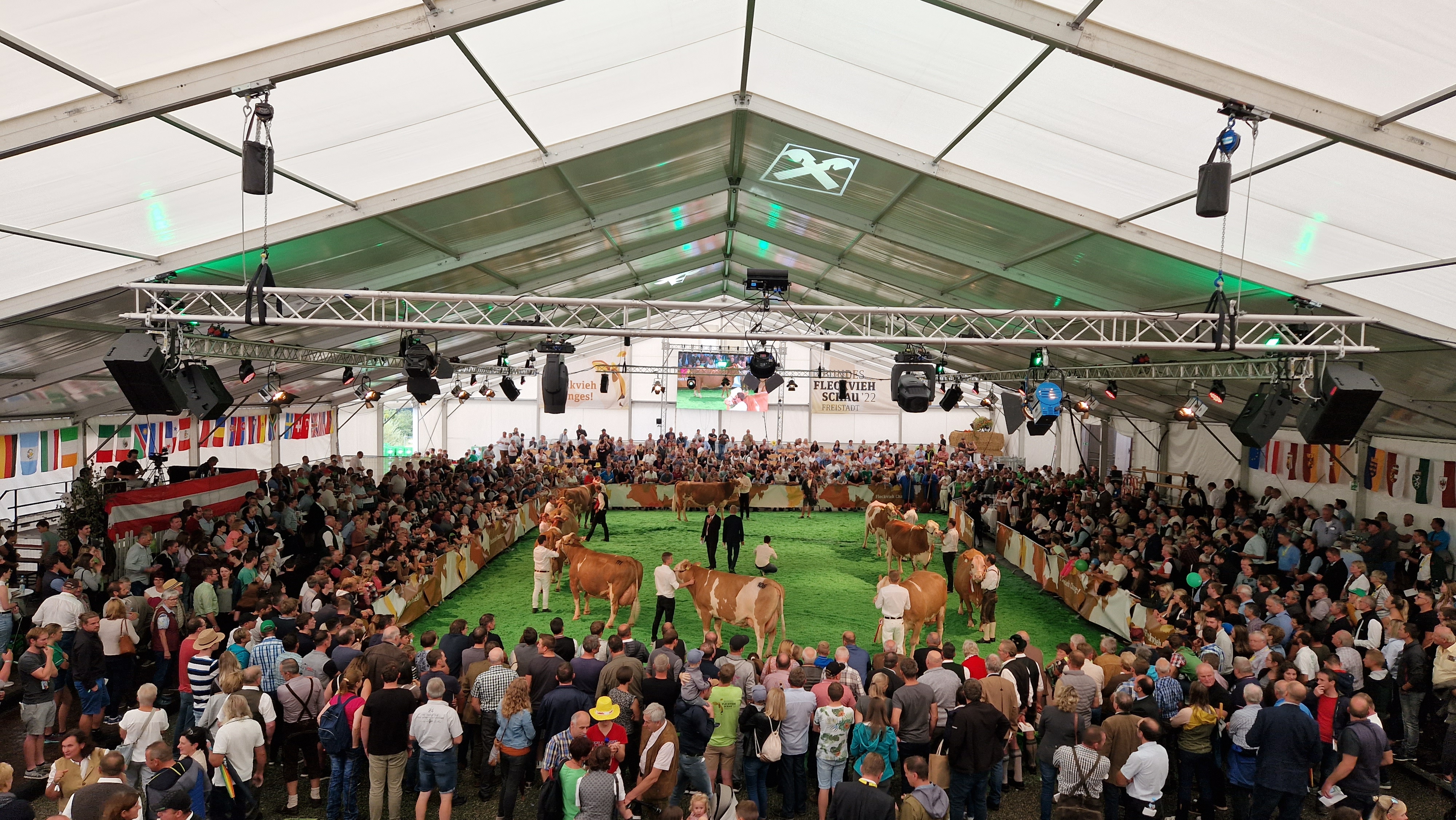 On the weekend of 3 and 4 September, Freistadt was the meeting place for the national and international Fleckvieh scene. It is fair to say that the National Fleckvieh Show set new standards in all respects, thereby influencing the quality of the exhibition animals, the professionalism of the event, and the interest of the visitors.

Several thousand visitors from more than 30 nations followed the greatest breeder highlight of the year during the two days on-site in Freistadt. On Saturday evening, the opening ceremony, the finale of the FleckScore World Cup, the offspring presentations, the young breeder competition, and, as the crowning conclusion of the evening, the elite auction took place. On Sunday, the focus was on the exhibition cows. 115 Fleckvieh cattle from all the Austrian breeding organisations were presented in 18 groups. Particularly noteworthy was the delightful range of operations on exhibition. The animals exhibited at the National Fleckvieh Show came from 125 different Austrian breeding farms. The genetic diversity of the Austrian Fleckvieh cattle can also be expressed in figures. The 115 exhibition cattle came from 66 different fathers. The crème de la crème of Austrian Fleckvieh breeding was in the ring, and Josef Zieglgänsberger, breeding director at Mühldorf and Pfaffenhofen, ranked in a true marathon.

Immediately anticipated: The great winner of this show was the canton of Carinthia and its WEISSENSEE. The record for caRINDthia: 2-time winner of the national champion title. Josef Ziegelgänsberger named the IDAKO daughter WANDA from Dullnig Friedrich, Kremsbrücke, and the WEISSENSEE daughter ELVIRA von Lichtenegger Karin, St. Margarethen im Lavanttal, the national winners among the older cows.

The federal reserve champion among the young cows was also a WEISSENSEE daughter: MELONE from Anzengruber Florian, Pram, FIH. With the IVAN daughter HELLEN of Danner Manfred and Monika, Tarsdorf, the FIH also introduced a second national reserve title among the older cows. 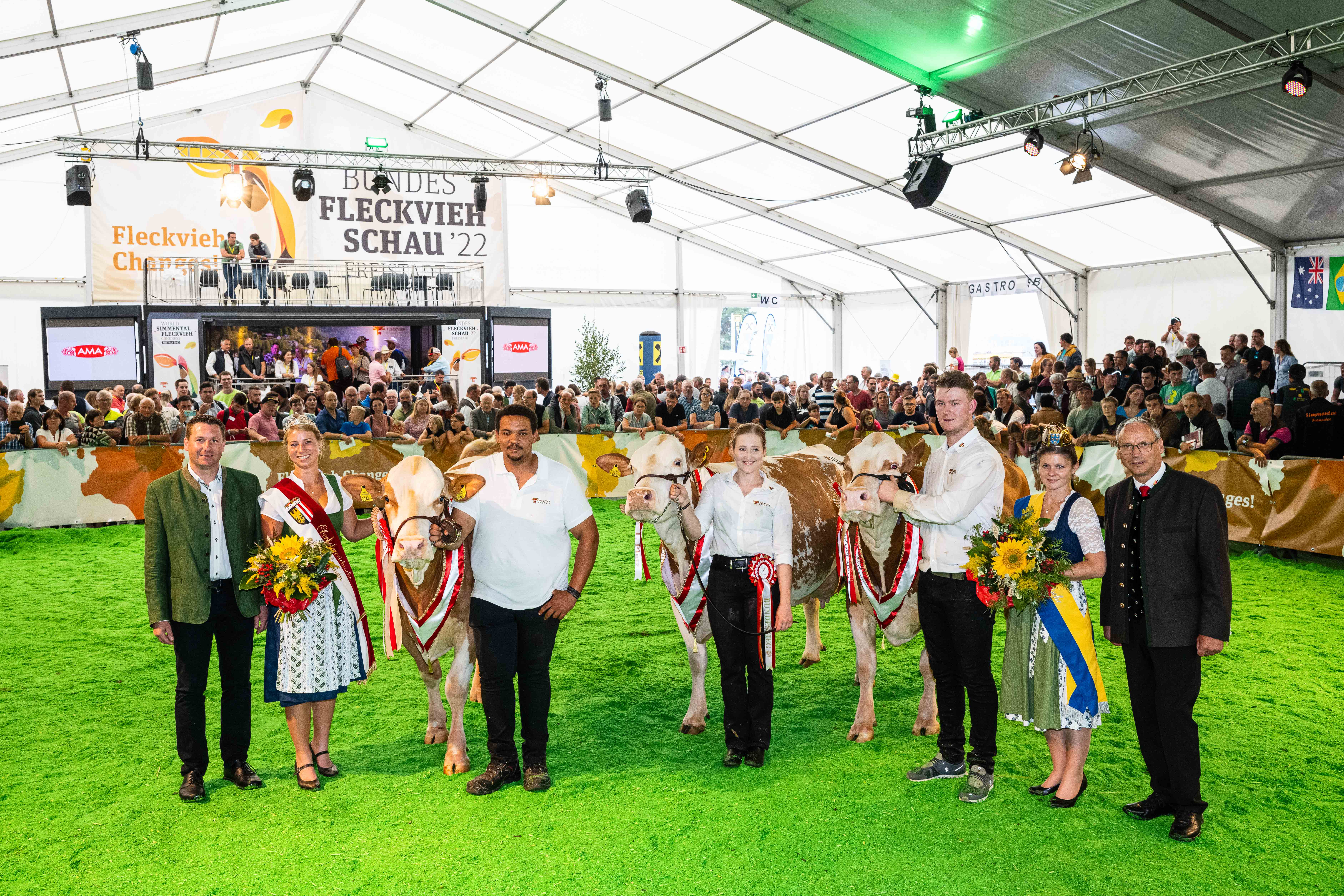 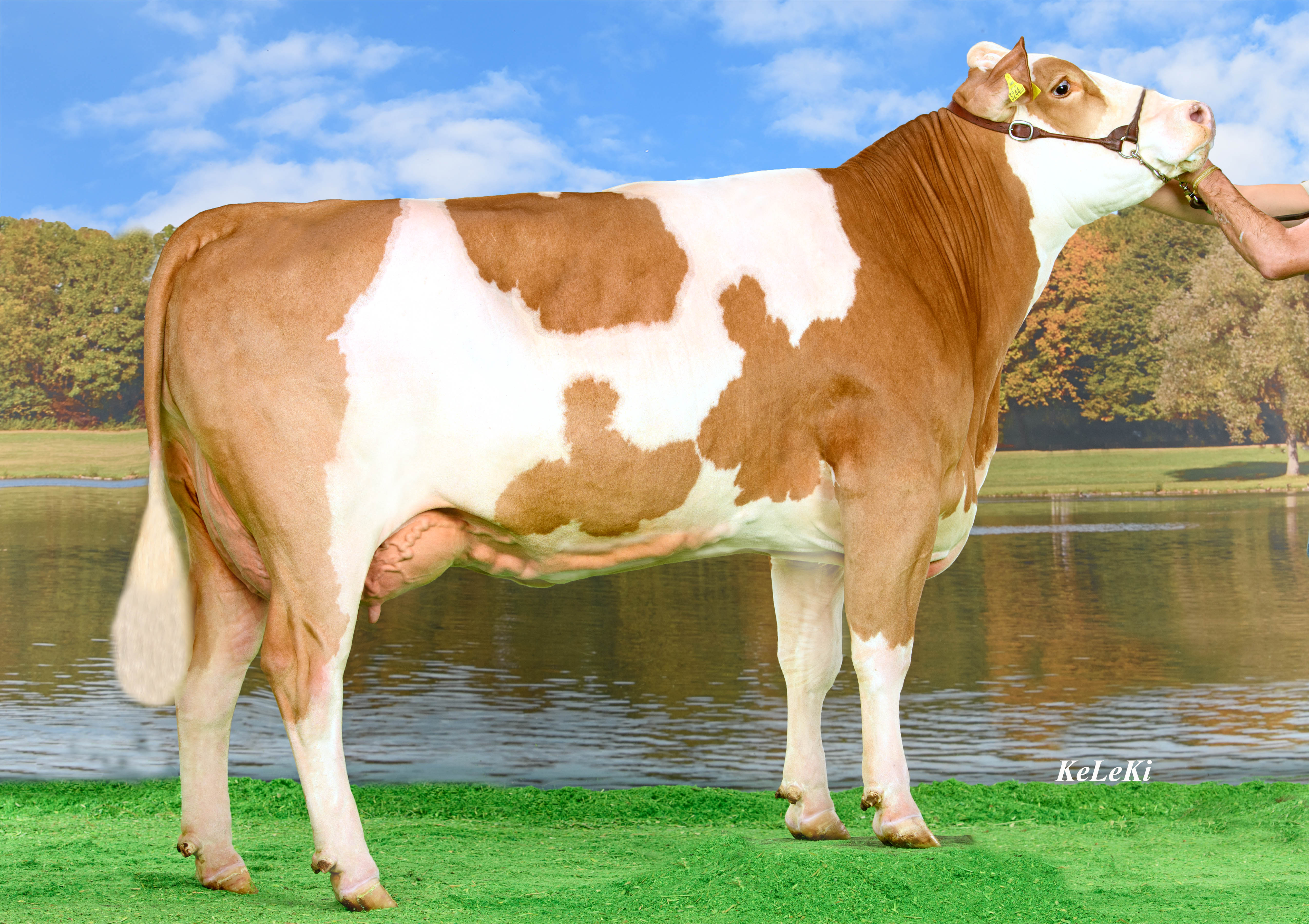 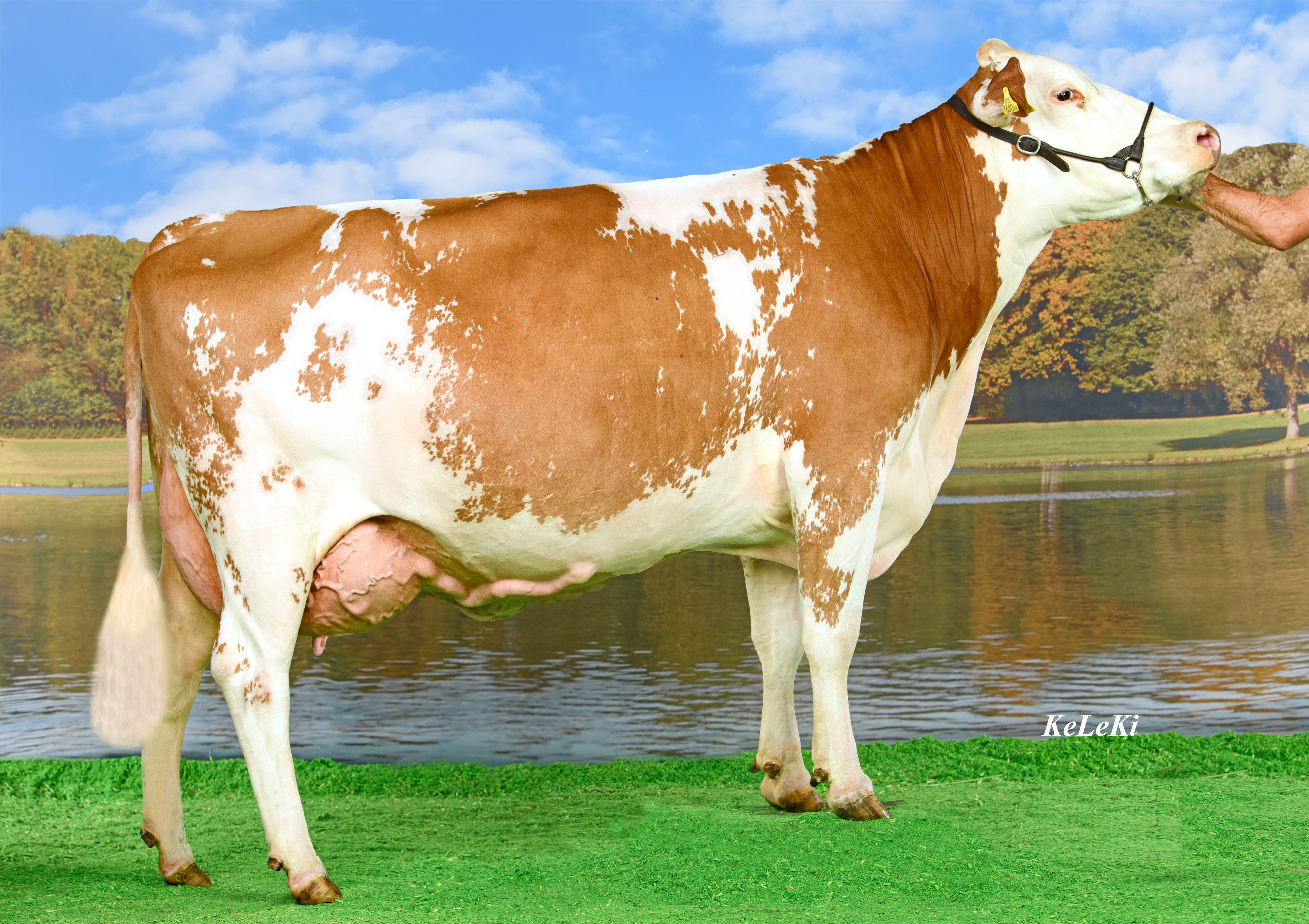 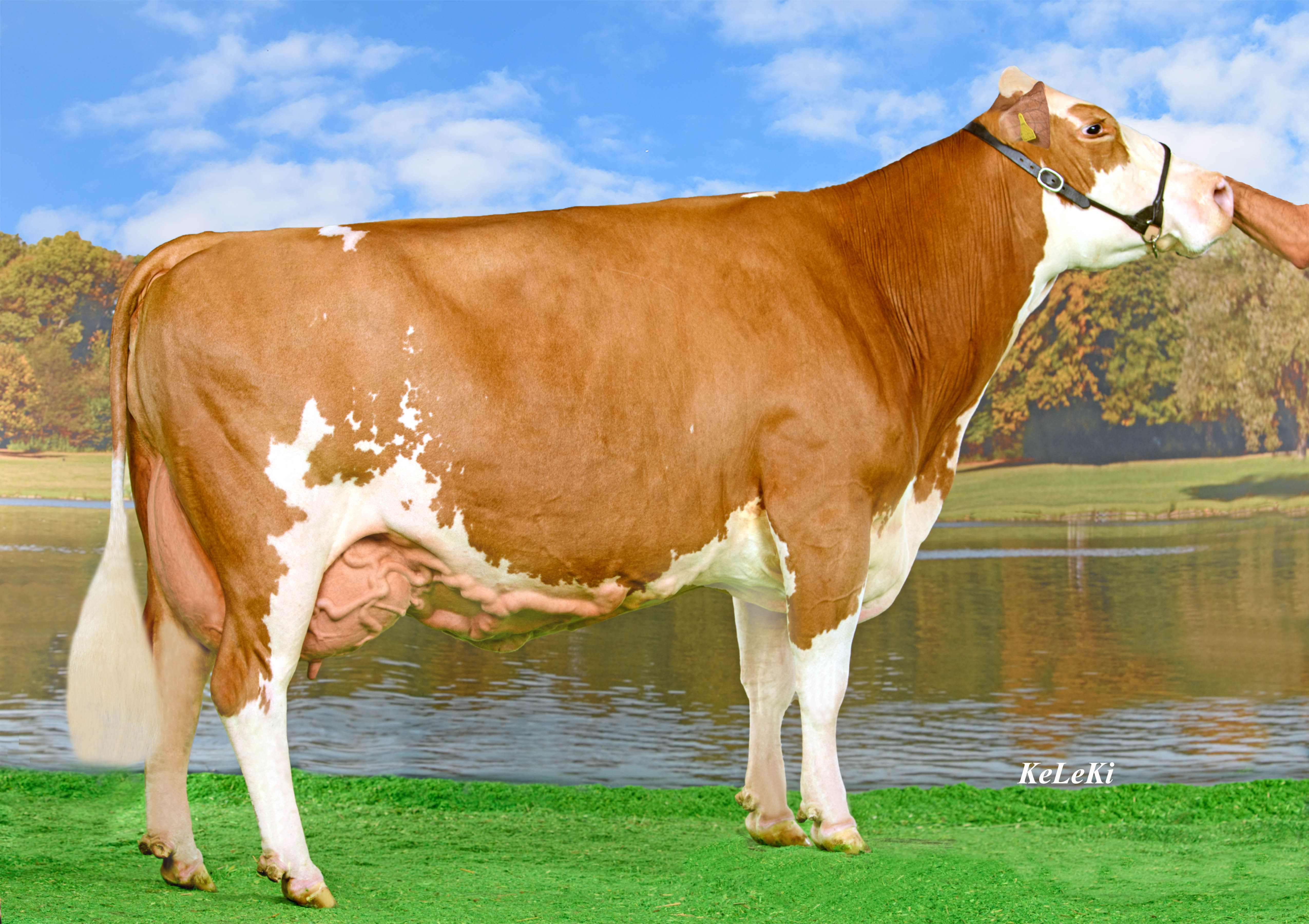 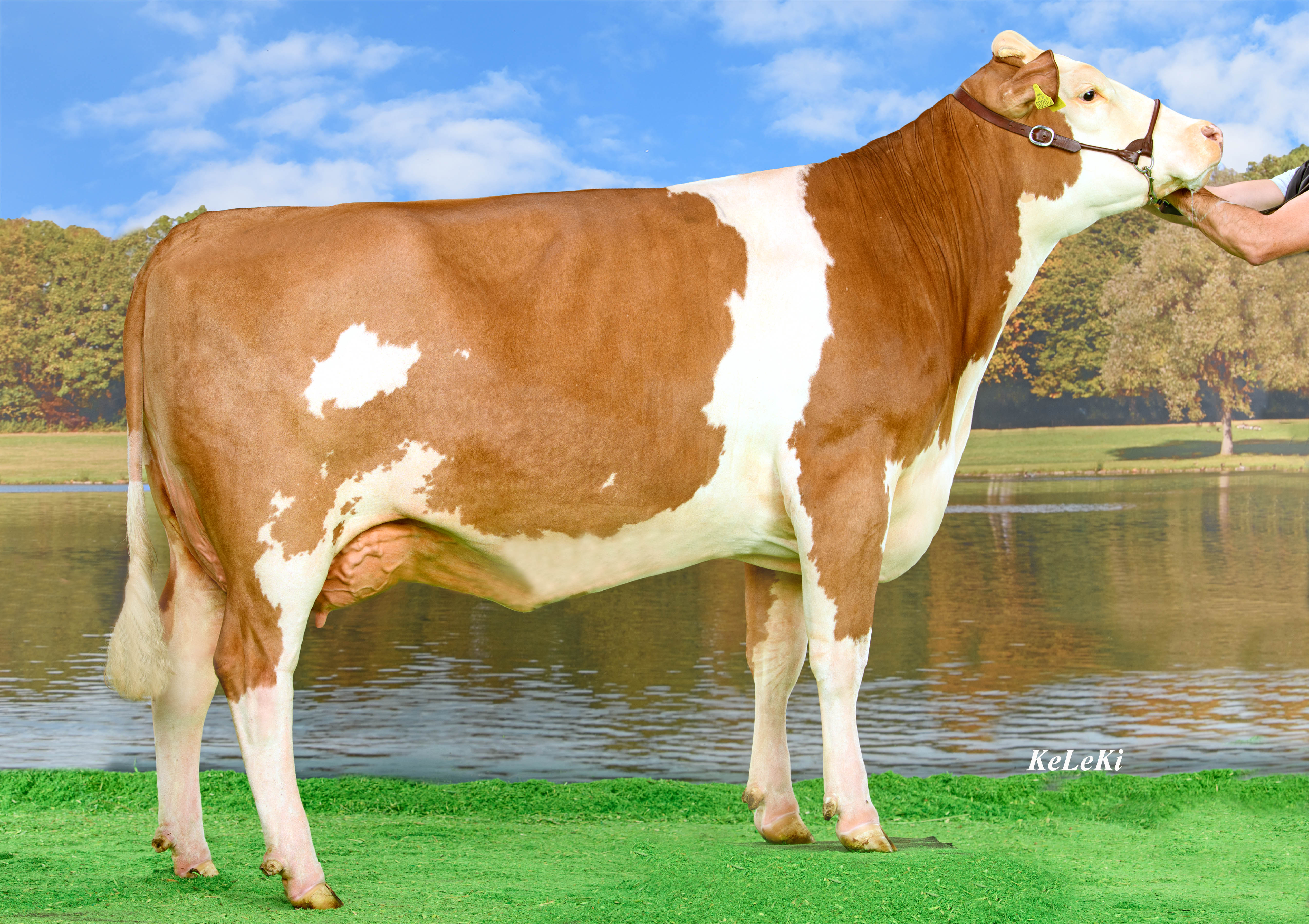 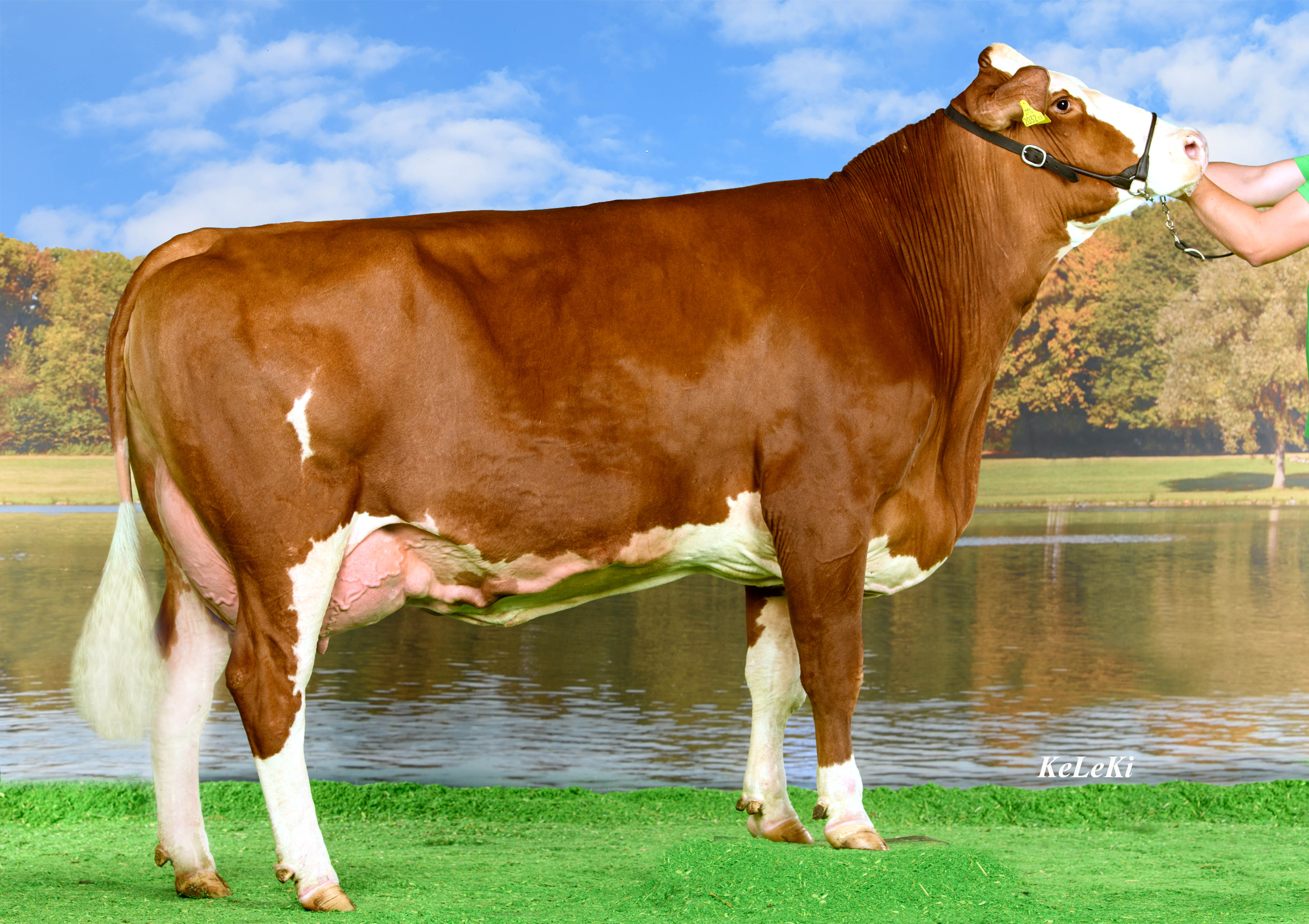 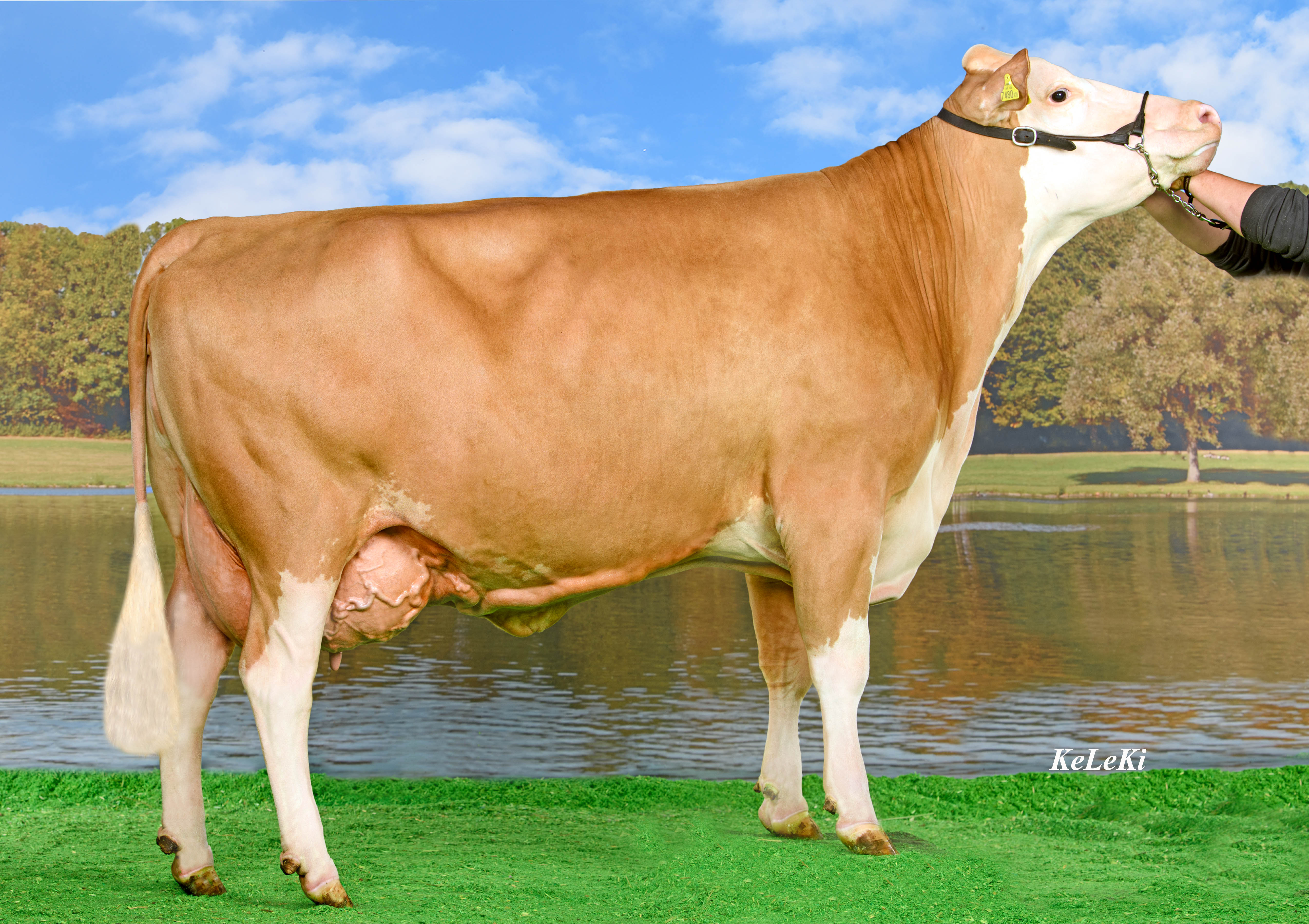 Offspring presentations as a reflection of the Fleckvieh Austria breeding programme

The offspring groups met with the highest level of interest from the audience: the breeders and the specialists from Austria and abroad had the opportunity to get a picture taken with the daughters of the three resoundingly successful Austrian Simmental cattle, GS WOIWODE, WEISSENSEE, and GS DER BESTE. With the breeding level of the selected fathers and the quality the daughters exhibited in the groups, an unprecedented level in offspring presentation at a national show could be achieved. The audience was also very enthusiastic about the offspring. We begin with the daughters of GS WOIWODE. The six daughters exhibited fine footing, very good udders, and presented themselves as very well-balanced. Dr Friedrich Führer specifically highlighted WOIWODE's excellent fitness inheritance in the form of high fertility and good udder health. 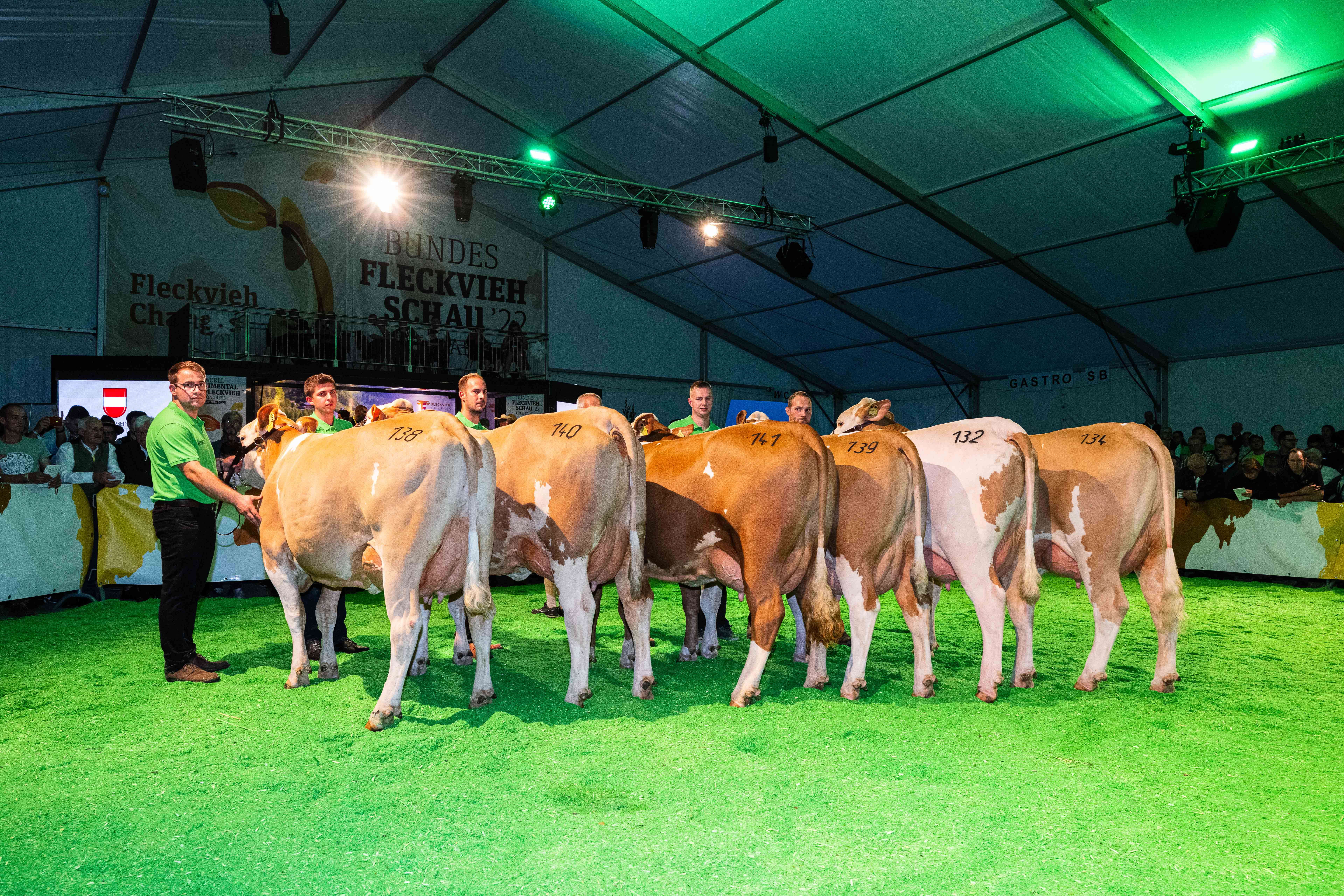 With WEISSENSEE, EUROgenetik exhibited the best progeny-tested WABAN male offspring. Christian Straif, qualified engineer (Ing.), pointed out the flat lactation curves of the daughters, combined with a very high level of performance and very good udder health. The quiet character of the WEISSENSEE daughter is also a positive feature according to the managing director of EUROgenetik. 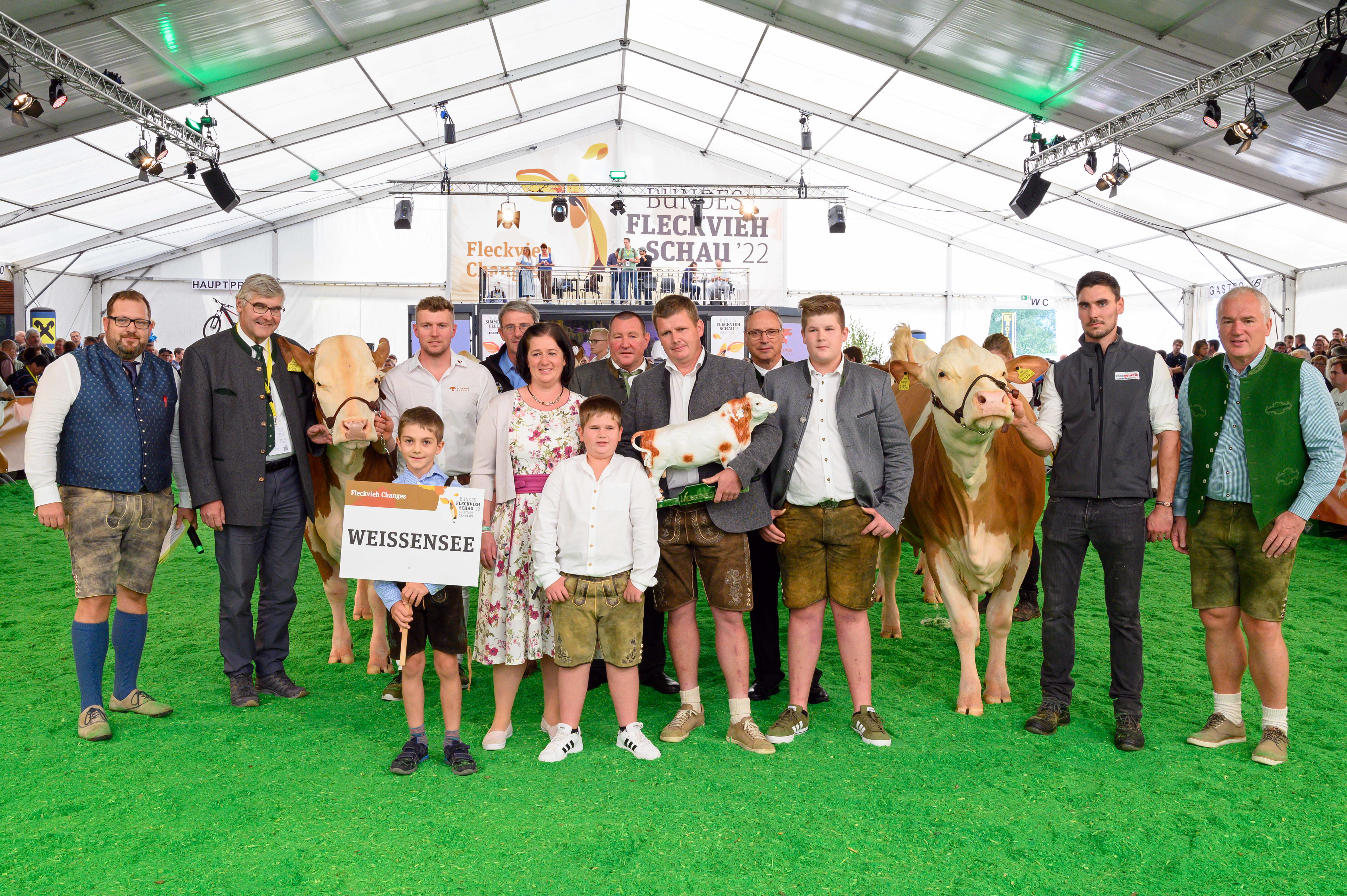 Photo 22: Honour for the Zmug family as WEISSENSEE's breeder (Haubner)

As the last group, cows marched in with the daughters of GS DER BESTE who were already one or two lactations more advanced than the previously presented daughters. The roughly medium- and low-frame daughters of GS DER BESTE exhibited an incredibly uniform udder quality with very highly attached and well-suspended udder bodies, which easily yield high performance, as Peter Stückler, qualified engineer (Dipl. Ing.) of GENOSTAR remarked. 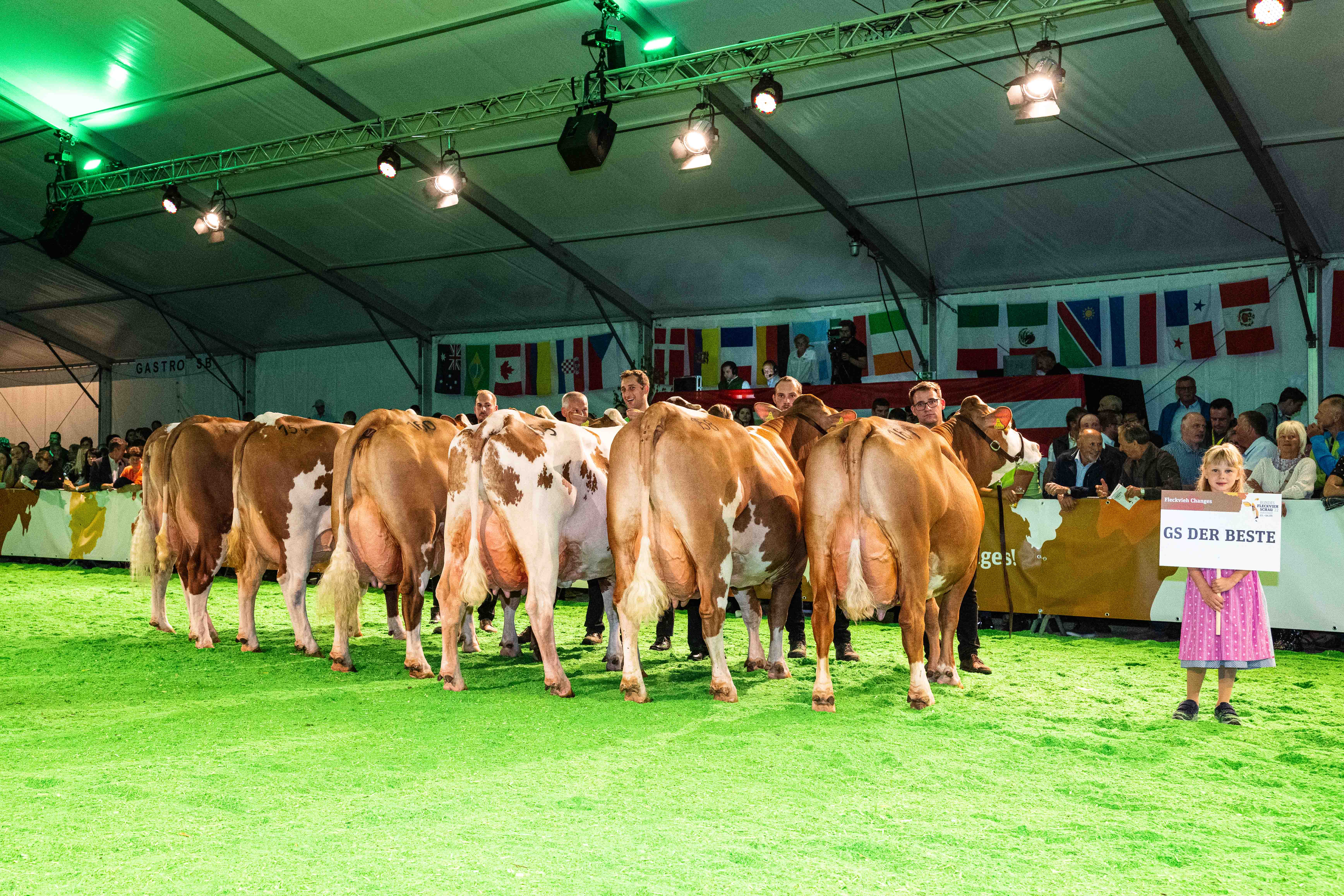 The 2nd International FleckScore Competition was held in Freistadt as part of the National Fleckvieh Show 2022. The competition attracted a great deal of interest: 45 people from 7 countries took part. The participants had to evaluate five cows according to the FleckScore system. The aim was to come closest to the evaluations of the level judges. Bernd Luntz and Hubert Anzenberger from LFL München-Grub in Bavaria, Josef Thanner from Rinderzucht Tirol, Gebhard Kitzmüller from FIH, and Gerald Pollak from Fleckvieh Austria served as level judges. The three best evaluators of the afternoon entered the finals of the FleckScore World Cup in the evening. Under the moderation of Johannes Penz, RZO, and with great interest from the audience, the three finalists evaluated a Simmental cow according to the FleckScore system. After the assessment of each attribute, the results of the participants were projected onto the large screen and the difference from the target was calculated. From the beginning, Josef Gaugl took a small lead, which he narrowly defended until the end. He thus became the champion of the 2nd FleckScore World Cup, closely followed by Johannes Krug from Germany in 2nd place and Alexander Hörmandinger in 3rd place. 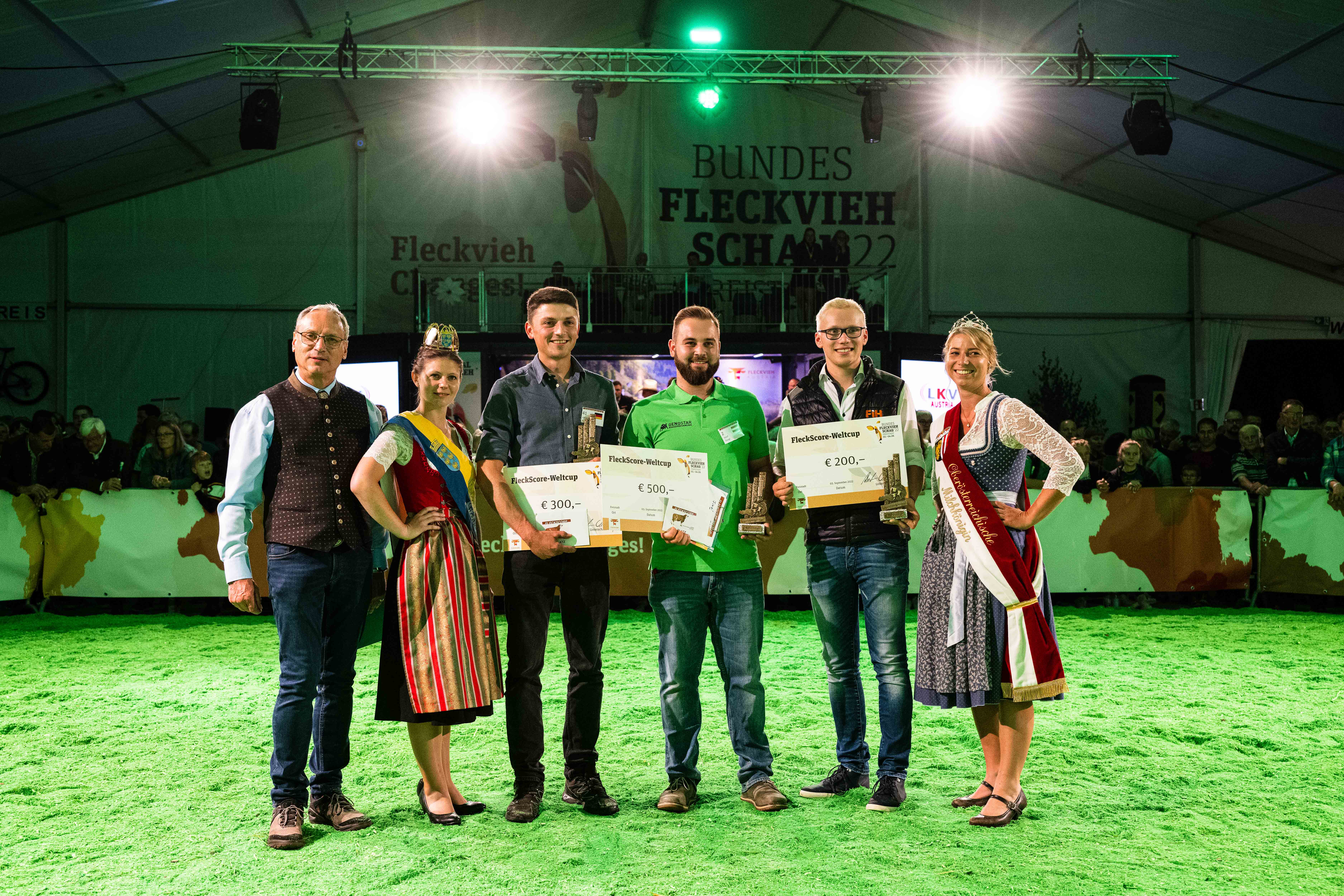 The crowning conclusion to Saturday evening was the elite auction. Five males and 12 females were offered, including eight naturally polled females. A heated duel between bidders took place over STELLA Pp*, a combination of GS DER BESTE Pp x WEISSENSEE, from Günter Glettler, Styria. It was eventually sold to Bavaria for 26,400 euros. As the most expensive bull, WOLKENTÄNZER, the son of WINTERTRAUM, was auctioned off by Erna Maria and Norbert Luschnig, Styria, for 39,000 euros. The auction of embryo packages held via the online marketing platform Kuh4You was also successful. The most popular package was the WANNABE PP* combination from the mother of WIRBELWIND P*S, which was purchased by a breeder from Bavaria. 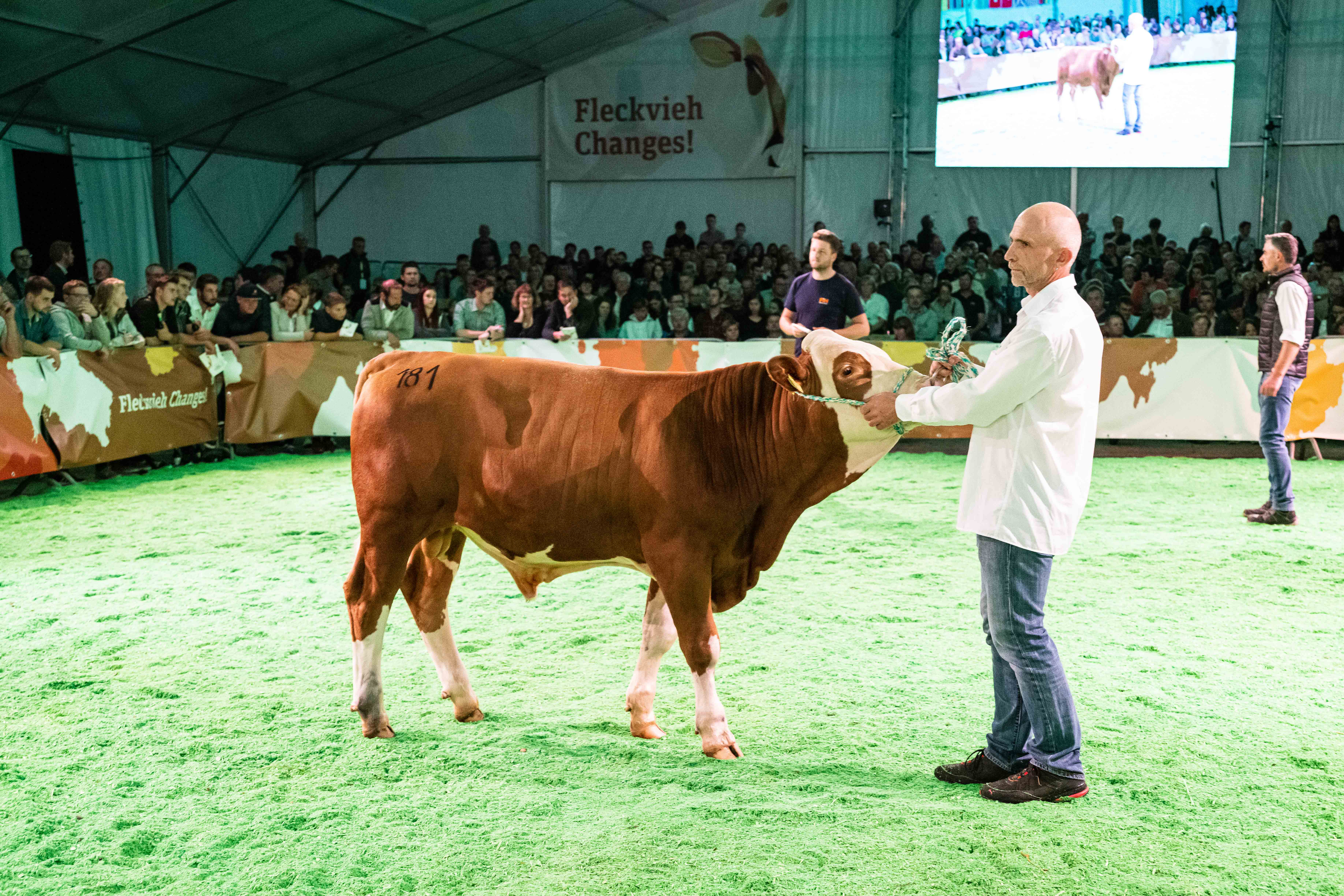 The National Fleckvieh Show 2022 in Freistadt was a breeders' festival of superlatives. Never before could such a range of first-rate cows of the Fleckvieh breed be presented. The goal of presenting the cattle in the show ring, which can also play a role in the breeding programme, was more than impressively achieved with cows from all age groups exhibiting the highest quality in exteriors. The strength of the Fleckvieh Austria breeding programme was more than confirmed with the qualitatively convincing array of offspring, whose representatives also placed high in the main competition.

The concept of combining the National Fleckvieh Show with the RZO Beef Festival (Rindfleischkirtag) provided an attractive opportunity for thousands of trade visitors and consumers at the same time. Together with the new concept of a live stream with comments, an impressive number of more than 15,000 (!) people interested in the breeding progress of Austrian Fleckvieh cattle followed the action on the weekend of the show. The National Fleckvieh Show in Freistadt, the professional highlight of the Fleckvieh World Congress in Austria, was attended by guests from a total of 33 countries and therefore also captures a unique rank in international appeal.

The German Fleckvieh Show 2022 in Freistadt will be remembered as a breeder's festival of superlatives and a successful international showcase for the achievements of Austrian Fleckvieh breeders!